Let's start with the beginning. The GT Turbo, as most carburettor cars, is a bit tricky to be started (if you come from injection cars or from no car at all). There are two basic procedures:

When changing gears, the gear lever connects the selected speed mainshaft (or secondary shaft) gear, always engaged to the input (or primary) shaft correlated gear to the mainshaft itself. The mainshaft is rotating at a proportional speed to the wheels one, while the mainshaft gear rotates with the engine speed, at the moment of the clutch pedal stepping, and decreasing because of the oil and bearing friction.

Gearing up isn't usually a problem, since the synchro gear engagement system can handle the minor spinning speed differences. The input shaft decreases its speed until being close to the mainshaft one (and the engine will move to a lower r.p.m. after the gear change). Meanwhile, gearing down is much more difficult, since the input shaft should rotate faster (you'll get into more r.p.m. after the gear change) than it was, which is not possible. That's why it's harder to engage a lower gear, it requires more time and it punishes the gearbox shortening the synchro rings life.

The solution is to use the double-clutch manoeuvre. The principle is to match the shaft and gear speed before engaging them via adjusting the primary (and so gear) speed with right engine speed in neutral. That's made trying to rev the engine just to the point it'll be in the gear you're going. This is the tricky part, but it's a matter of practice.

It can be applied to gearing up or down:

With a good ear to adjust the revs, you can feel how easily the gear lever engages the speed, and theorically you could drive without even using the clutch. Of course this is only useful if you break the clutch cable or something like that...

When you need to keep the left foot on the clutch, brake and accelerate at the same time, the only solution is to use te right foot to push two pedals. The GT Turbo gas pedal shape was thought to allow this easily. There are two ways to achieve this, depending on the car pedal disposition and personal ankle mobility :-):

The danger here is that, when you do double-clutch frequently, you get the habit to brake always using the tip, and you might get into touching slightly the gas pedal while braking, which obviously reduces the braking power of the car. A brake pedal separator could be useful here, specially if you use the side of the foot.

Disclaimer: These sliding techniques are evidently not intended for road use.

A common problem with front-wheel drive cars is that, being all the weight located on the front axis, the car is prone to understeering, specially if you accelerate hard. In sharp bends or in an emergency situation, a controlled slide of the rear axle might be interesting. The hand-brake can be used for that, if you give a fast pull and release at the right point of the bend, when the car weight is located on the outer front wheel. If you're accelerating hard or the bend is not sharp enough the rear end will be too charged and the pull won't achieve anything. Controlling a slide is not trivial, as counter-steering and gas pedal must be carefully and precisely applied to avoid the full turn or a new slide in the opposite direction. Practice in an open lonely surface is a must-to to get the car's reactions. 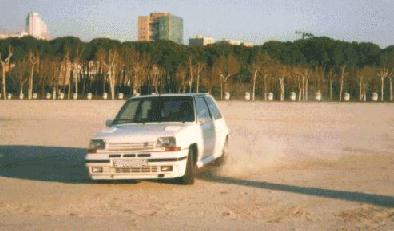 When a rear axle slide starts, depending on the speed you have, the car starts turning (brutally) and will tend to turn up to 180°. If is not the desired angle, or even the slide was not desired at all, counter-steering must be applied. That's turning the steering wheel to where the rear is going to make the front advance in that direction too. The wheel must be turned the right amount, and it's a matter of practice because you must learn to 'feel' the front wheels position. Once the slide is being controlled, the steering wheel must be returned without delay to its position to avoid a sliding to the opposite direction that would invariably take you out of the road. A mark in the top part of the steering wheel like those some sport wheels have could be a help, but get the feeling is the most important.

In addition, the pedal manipulation have a great influence on the sliding. If you brake, even slightly, the car weight transfers to the front axle and the rear one losses adherence (more slide) while if you accelerate, the opposite phenomenon appears: less rear slide (and maybe understeering).

Slow steering gears will need a lot of steering wheel turns, which can be difficult to apply in time. The GT Turbo has a relatively fast one, so fast hands and practice in an open free surface is all you should require.

Disclaimer: These sliding techniques are evidently not intended for road use.

This is the more difficult technic. When you have the car on an open bend, putting all the weight on the outer wheel, at the adherence limit, a slight braking is all that you need to start a controlled slide of the rear axle. Stop accelerating could be a mean to achieve this, but a better weight transfer will take place if, while you keep the engine pulling from the front of the car, you use your left foot to brake, as shown:

At the beginning it's difficult achieve the right pressure, since the left foot is used to push hard the clutch pedal all the way down, but you can learn to be sensible with it as much as you are with your right one, just be sure there is no car after you when you first try! :-)