1972: The R5 model is born. Different models would be produced, and the car would become a real best-seller, but the sport version, with a turbo attached to the 1397cc block came with the R5 Alpine Turbo (110 bhp).

1980: The R5 Turbo starts being produced. It was a rear-driven mid-engined monster based on the R5 with enormous rear arches and the same block (but with 165bhp this time). The beast was a prototype (including fuel injection) that ruled the world of rallies with Jean Ragnotti, Carlos Sainz and others at the wheel. Brutal performances (0-100kmh in 6.4s) for a car out of the world it lived. Only a few were sold to a few privilegees!

1982: The R5 Turbo 2, the second generation, with some upgrades, arrives (185 bhp). Produced as a natural continuation to the rally successes, once prepared to race it could obtain over 360bhp from the same block! 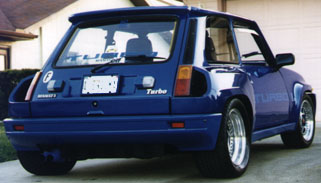 1984: The Maxi 5 ends with the monster history. Sold only to homologate the Gr. B rally car, and using all the technology available at the moment, could reach more than 400bhp using 1527cc. The end of the Gr. B meant the death of these machines development. 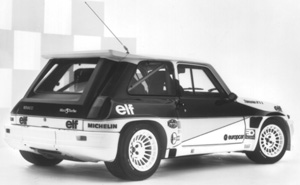 1985: The sport model of the SuperFive, the GT Turbo, is born. Renault develops the phase 1 Renault 5 GT Turbo, with its 115 bhp for 860 kg and its Garrett T2 turbocharger blowing the eternal 1397cc block. It was a nice engineering work to adapt the SuperFive to the horsepower it had to cope with, due to its nature of light small car, and so we have an absolutely full engine bay, lots of hoses and wires, lots of special components (they _must_ be special, because Renault spare parts tend to be much more expensive when you mention it's for a GTT)... but the final result was a wild machine that started to make its own legend...
Let's take a look at the original Renault advertising (in italian)... 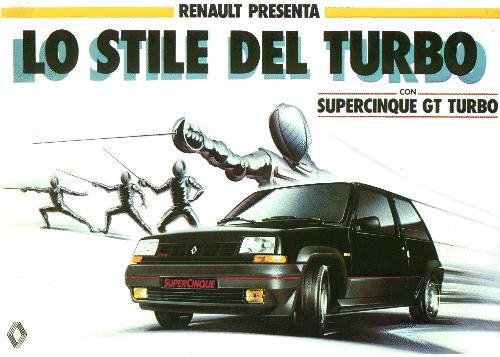 In the very beginning, the car was distributed only into the 'Coupe' version, that was sold only to competitors into the Renault Cup (Coupe means cup in french, as you'll have guessed). Those cars had some peculiarities, but in Spain 'Copa Turbo' (Copa means cup in spanish) was almost a synonymous of 'GT Turbo' because there was an old R5 model that was also called 'Copa' and the GT looked like its natural continuation. This is how a Cup version car looked like: 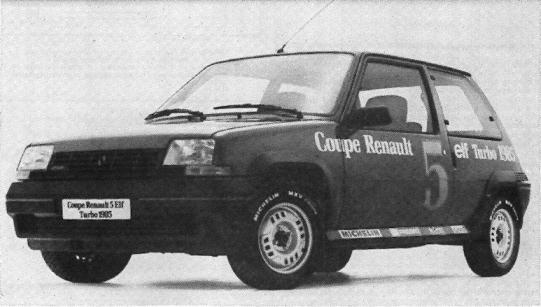 1986: From May (in France), Renault starts using the water-cooled T2 turbocharger. This drove to a longer life of the turbo, because turbo reliability (due to improper use of the turbo!) was a common problem until these ones arrived...

1988: The major renewing is done, producing this car: 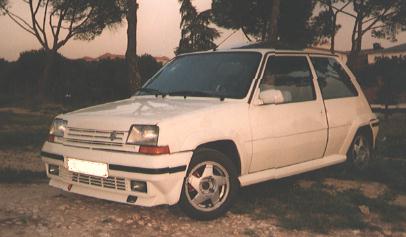 The main changes introduced with the phase 2 were:

The last limited edition of GT Turbos was produced in electric blue ('Bleu nuit' in french), in honour of the '89 Gr.N title obtained by Alain Oreille driving a GT Turbo, and is also known as Raider. They came with phase 2 wheels painted in the body color and full equipment.

It was the end of the turbo age, leading to more progressive and civilized engines, of those that anyone can drive without problems (I love that kind of problems...). As you know, the beginning of the 16 valve age.

Anyway, admitting the Clio 16v had a technically superior engine (it finally ends with the 1397cc block use), and a greater top speed, it never reached the GTT acceleration, and, of course, never gave that turbo boost kick that makes you adrenalize so strongly!